Oil with a heavy legacy 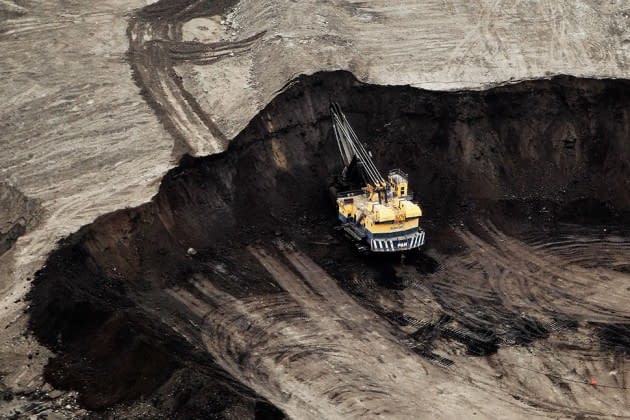 Economic problems linked to lockdowns prompted by the COVID pandemic coincided — all too adversely — with the OPEC price war, futures went negative (though not for long) and for a time companies simply had nowhere to store already extracted oil for which there was not a great deal of demand. Financial markets stopped supporting the North American oil industry at the very moment when it was vital to so many in it.

But now, in December, things do not appear quite so gloomy.

The world economy is showing signs of recovery and the countries of OPEC+ have displayed the will and the possibility to reach agreement on pricing policy.

But how has the COVID crisis affected the world’s fourth largest oil producer – Canada?

The province of Alberta is the home of heavy bitumen oil – a mixture of sand, clay and hydrocarbons and the source of more than 80 % of Canada’s oil production.

Extracting bitumen is an extremely complex and energy-intensive process. On the one hand, bitumen requires considerable capital investment. On the other hand, that process is far less susceptible to market fluctuations inherent to production of shale oil.

Oil production in Alberta has been slowly rising over the last few years – the main inhibiting factor is inadequate infrastructure for transporting hydrocarbons. The Fraser Institute estimates that in 2018, shortages of pipelines cost the Canadian oil industry some $C 20 billion in unfulfilled production.

Western Canadian Select (WCS) oil has consistently commanded a lower price than West Texas Intermediate. And never had the price been as low as last spring – less than $4 a barrel. On 20th April, the price of Canadian oil improbably plunged into negative figures.

But the price rose again and in December climbed to $33.

Canadian oil prices began their decline six years ago. And investment in the sector has fallen to $26 billion from $34 billion in 2014. As a result, the province of Alberta, Canada’s oil Mecca and the wealthiest part of the country, began to suffer from unemployment. The jobless figure currently stands at about 11 %.

As Alberta’s Energy Minister Sonya Savage reported in October, oil production in the region has sunk 16 % from pre-COVID levels. That level sank further to 22 % at its lowest point – or 880,000 barrels per day.

According to the federal energy ministry, oil production in the first half of the year throughout the country plunged 20 % from average 2019 levels of 5.5 million bpd. The International Energy Agency says that from March to April production of oil and other liquid hydrocarbons fell to 4.9 million bpd from 5.6 million.

The last time Alberta was subjected to such a crisis in the oil sector was in 2016, when devastating forest fires prompted the industry to stop its operations and evacuate its workers.

Heavy Canadian oil has a particularly bad reputation among environmentalists.

Bitumen — thick, sticky and viscous – is especially dirty and can have extremely negative effects on the environment. Canada is the leader among all oil-producing countries in terms of emissions per barrel, according to experts Rystad Energy.

Major international companies have recently declined to take part in Canadian bitumen projects – roundly criticised for the industry’s high carbon footprint and its level of energy-intensity.

Last summer, French giant Total sold off all its assets in the Canadian tar sands worth in total $7 billion and also withdrew from the Canadian Association of Petroleum Producers (CAPP), saying the association’s position failed to match its values in the debate on climate change. Total said it believed its assets committed to the oil sands – operations which had been due to get under way in 2040 — had few prospects .

Norway’s Statoil (now known as Equinor) sold off its interests in Canada four years ago. And in 2017, Shell and Marathon Oil shed their projects in the country. Also joining the list of countries abandoning Canadian projects were ConocoPhillips and Devon Energy of the United States, along with major investment banks. Last summer, Deutsche Bank announced it would no longer finance projects involving oil sands – joining their opposite numbers at HSBC, BNP Paribas and UBS.

The main question under discussion in the industry is whether Canada can quickly recover, given that forecasts for restoring demand remain far from reassuring. Many experts have specified that oil extraction cannot be carried out without a loss in many of Alberta’s oil deposits at any price below $50.

According to Rystad Energy, should oil prices remain at their current level of about $40 a barrel, Canadian production would be no more than one-fifth of its recoverable reserves. That is the lowest figure among other oil-producing countries.

And Canada’s Natural Resources Minister, Seamus O’Reagan, says high revenues from extracting Alberta bitumen will have a decisive effect on financing the energy transition in a country striving to reduce greenhouse gas emissions.

For many years, lack of infrastructure has been the main limiting factor for the country’s oil industry. Oil located far from consumer markets has to be not only extracted, but also delivered to paying customers. For many years, Canada shipped its oil to refineries in Texas by rail or road because there were insufficient numbers of pipelines.

One of the projects intended to alleviate this problem was supposed to be the Keystone XL pipeline from Canada to the United States. But opposition to the project has been growing from environmentalists and residents along its path, including Indigenous residents. Another negative factor on the project’s development is the lack of any clear plan to build a continuation of the pipeline within the United States.

Canada began construction of its part of the Keystone XL pipeline despite having no clear picture of the project’s fate on U.S. territory. A pipeline nearly 2,000 km long was to supply 830,000 barrels of oil per day from Hardisty in Alberta to Nebraska from where pipelines already in place would take it to refineries on the coast of the Gulf of Mexico. Plans called for the project to be in operation from 2023,

The U.S. Supreme Court, however, last summer upheld a lower court decision to block the granting of a key permit for the pipeline.

The Trans Mountain project will provide greater capacity to an existing oil pipeline – to 890,000 barrels per day from 300,000 bpd – running from deposits in Alberta to the port of Burnaby in British Columbia. Construction on the expanded pipeline and the terminal is already under way but costs have jumped from $7 billion to more than $12 billion. The project still faces resistance from environmentalists and Indigenous groups in British Columbia, including in the courts.

Line 3 pipeline owned by Enbridge Energy involves replacement with wider diameter pipe on a large part of the pipeline’s route with the aim of nearly doubling its capacity to 760,000 bpd. Construction of the Canadian section of the upgraded pipeline, at a cost of $5.3 billion, was completed at the end of last year but the project has encountered new construction delays south of the border.

Earlier this month, regulators in the state of Minnesota gave final approval to complete construction after a series of hearings and legal action. But environmentalists and Indigenous groups have pressed on with new protests against the project.

For the past two years, Alberta has been conducting an OPEC-style experiment, limiting oil production against a background of a lack of pipeline capacity and surplus reserves which led to falls in the oil price.

In November, The limit amounted to 3.8 million barrels per day, but in December, the limits will no longer apply, the provincial government announced. Over the course of several months, production levels will be lower than the imposed limits.

“…Current forecasts show that inventories are expected to remain low, with sufficient export capacity to allow the system to operate efficiently on its own well into 2021,” the Alberta government said in a statement.

Experts do not expect production in western Canada to exceed pipeline capacities until the middle of next year —  storage volumes will be quite low. According to Genscape Inc. data, reserves amount to 20 million barrels. The Keystone pipeline, it said, should be able to export an additional 50,000 barrels per day of oil next year.

But provincial authorities could reinstate the practice of limiting production if required.

BMO Capital Markets forecasts a rise in the price of Canadian oil next year as exports of Mexican oil to U.S. refineries are expected to decline. There will be no supplies of Venezuelan oil at American refineries  and the Mexican company Pemex forecasts a slide of nearly 70 % in its exports in the period 2021-2023, Bloomberg reported.

BMO believes that the price gap between Heavy Western Canadian Select and West Texas Intermediate will narrow in 2021 to $5-7 from the current difference of about $10.

Taking to the lifeboats

Facing repeated criticism from environmentalists, Alberta has tried to develop what amounts to non-traditional energy areas for the province – renewable sources of energy. And these attempts seek to reduce the province’s dependence on investment in fossil fuels.

In the autumn, the provincial government proposed a bill setting down a legal base for investment in geothermal energy. It calls for drilling geothermal wells on the basis of disused hydrocarbon facilities, using infrastructure from the oil and gas industry.

And Alberta is to try to use gas extracted in the province to produce hydrogen and to introduce small nuclear reactors. The government has also created a special council to develop ways of increasing production of the lithium and vanadium needed to create batteries.

A national body, the Canada Energy Regulator (CER), forecasts that oil production in the country will be on the rise for the next two decades. The CER predicts a peak in oil production will be reached in 2039 – 5.8 million barrels per day, compared to 4.4 million bpd now. The CER further predicts that fossil fuels will make up more than 60 % of Canada’s energy balance through 2050, although domestic consumption clearly hit a peak in 2019.

But while European oil companies may aim for a transition to renewable energy sources, their Canadian counterparts will not abandon oil while seeking to reduce greenhouse gas emissions emitted per barrel of oil produced.