“The future of energy” through the eyes of professionals 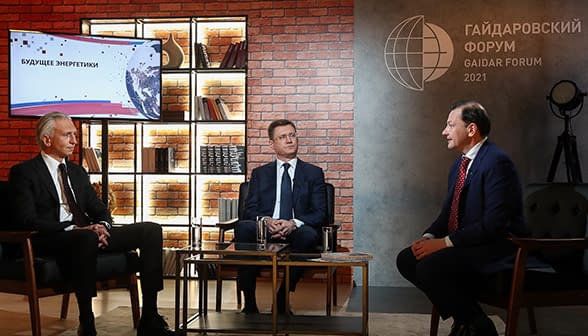 Three professionals took part in a discussion dubbed “The Future of Energy” within the framework of the 12th Gaidar Forum – Russian Deputy Prime Minister Alexander Novak, the CEO of Gazprom Neft, Alexander Dyukov, and the President of the Global Energy Association, Sergey Brilev – with the focus placed on measures to counter climate change, carbon capture and the future of hydrogen.

The discussion dealt with the key issues in developing world energy, particularly the prospects for introducing a cross-border hydrocarbon import tax in EU countries in 2022. This tax will affect the interests of all Russian exporters of energy resources and all aspects of industry with large energy inputs.

Alexander Novak said that in order to minimise negative consequences for exporters, it was important to proceed with work on Russian legal procedures to make them compatible with the EU’s methodology.

“When calculating CO2 emissions in fuel equivalent for every country, due consideration must be given to carbon dioxide capture by forests,” he told the forum.

“Much work lies ahead for the Ministry of Economic Development and the Ministry of Natural Resources – working out a new methodology and classification, with due account for pollutants meeting European standards and due account of the ‘carbon footprint” when considering supplies to Europe.”

In his remarks, Gazprom Neft CEO Alexander Dyukov said that despite widespread stereotypes, the oil industry was not the main “culprit” in terms of greenhouse gases throughout the world.

“The extent of the effect from transport in CO2 emissions is minor compared to the share attributable to homes and utilities or industry as a whole,” he said. “Specific CO2 emissions when calculating a tonne of oil sector production is roughly one-tenth, for instance, of that of steel production.”

All sectors of industry, he said, must therefore adopt an equally responsible approach to issues surrounding the introduction of “clean” technologies.

The President of Global Energy, Sergei Brilev, acted as moderator in the discussion and noted that  hydrocarbons will continue to play a considerable role in the world energy balance in the next few years – despite the declared intention of the EU of a gradual transition to renewable energy sources.

All participants shared this view and added that in these conditions it was particularly important to oversee the development of new technologies within Russia’s fuel and energy complex.

Alexander Novak stressed the technological prospects for industrial use of hydrogen.

“It is important to coordinate this activity, taking account of world-wide demand. Russia can take over a very significant niche as an exporter of technology and producer of hydrogen,” Novak said.

Alexander Dyukov pointed to devlopment overseen by Gazprom Neft, Including the process of injecting CO2 in oil deposits, a procedure that will allow both increased efficiency of oil extraction as well as solving the problem of disposal of carbon dioxide.

Russia plans to start deliveries of uranium fuel to China for use in its CFR-600 fas- neutron reactor, according to TVEL, the fuel division of Russian nuclear authority Rosatom, said in a statement.

American giant ExxonMobil announced last month it had signed an agreement with Norwegian firm HitecVision for the sale of its shares in 14 sections of the North Sea where the company produced 38,000 barrels per day of oil equivalent